End of Year Charts (so far!)

I'll get back to taking a look at new and recent releases soon, but I thought since the year is starting to come to a close, I should let you all take a look at how my end of year charts are shaping up. These aren't final, some of it might shift around a bit (especially towards the end), but here's where I'm at right now. 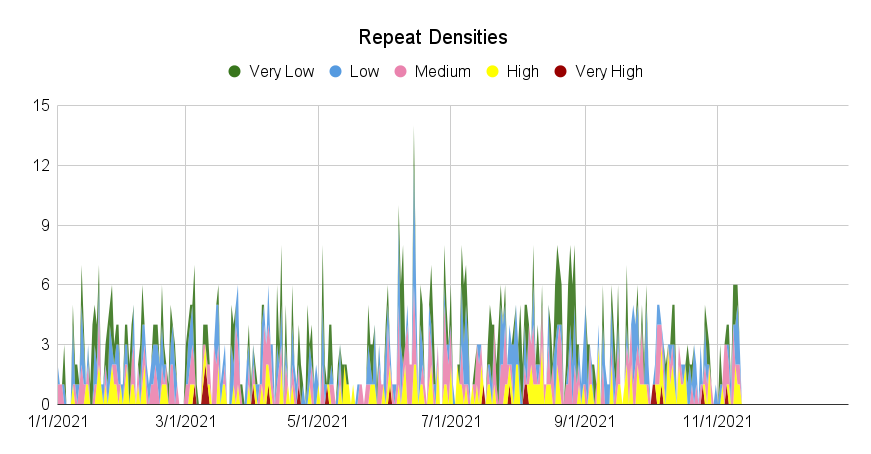 This chart is showing how long it took me to come back for another listen of a full album/ep/anything bigger than one song. So when I revisit something within one day, the chart shows that deep red. And then yellow if it was within a week, pink shows up within a month, blue within a half year, and then the deep green for anything longer than that. I've been pretty diffuse this year! Not very much of that deep red at all, and there's a few stretches there where there wasn't anything coming back around in the span of a week. Part of this is because this measurement is focused on full releases, so it's missing the times when I would only be returning to a song, but I don't think that would really change the picture that much. I do think there is some value in giving space to think about the music without immediately going back to the recording, to let it live as a memory for a bit. But I'd probably benefit from some greater focus! 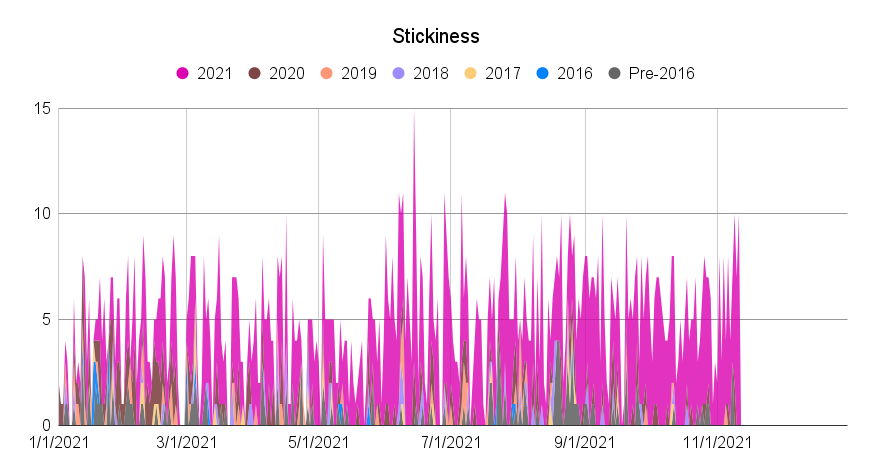 I've always been a bit contemporarily-minded, but I think that doing this website and looking at so much new music can set my feet a little too firmly planted in the present. This chart looks at what I was listening to, and groups each listen by the year I first encountered it. So all that magenta is stuff that I only heard this year, and ever since June, it has been an especially strong presence. Though my past does still make a pretty strong showing there up until September, that's when it all gets very 2021-centric. But in my defense, people keep releasing great music. I did want to make an effort this year to avoid any sort of temporal quarantine, since I kind of did that last year. 2020 had a lot of days where I basically treated the now as if it were all that existed, and that didn't happen so much with the current year. So I guess this is a step in the right direction, but I feel like I'll have an even better time if this looks different next year. I think it's good to draw connections across time instead of bunching them all up together, it's something I want to do more of.

One thing I'm not entirely sure on is whether 2021 has really been a magenta kind of year. I picked that color at the beginning of the year, but now that it's all mostly played out, I'm not so sure if that is really the one.

This chart takes the release year of what I listened to in the day and then averages it out. I guess it's just another way of telling the same story as above, which is that people keep releasing great music. There's a lot of time where that line is just completely maxed out to the top. Maybe it's not super important to always contextualize the new music with my own past, but it would probably be good to put the newly recorded music next to some music from the past. I need to carve out more time for significant explorations of older sounds. Though it's strange, I think maybe I begin to feel a bit trapped by the limitations of the past, like maybe there's a (somewhat false) notion that there are no boundaries on what the present can be, not until the future arrives and closes the book on it. So I just need to figure out how to best get over that nonsense!

There's a lot more ways to look at all of this, but I might as well let the year finish before going any further in-depth than this. Who knows what December could bring!

Also, I want to give a big thanks to anyone who's already sharing lists of music from the year. I've been finding out about cool stuff from them! If you're looking for anything like that from me, you should just go check out my anticipation list. Lots of good stuff on there!