Tonight at 8:30 PM EDT, there will be a premiere party for the new Fire-Toolz album Eternal Home, with small sets from Ben Levin, Euglossine, Bhob Rainey, Giant Claw, ---__--___, and more! There's an ambitious plan for a visual accompaniment to the album utilizing footage sent in from fans, it should be an exciting time for eyes and ears alike. So it seems like a great time to look back at all of the music videos that have been coming out in the lead-up to this release. I'll only be posting images on this page, but if you are going to watch these videos, please note that they contain flashing imagery which may not be suitable for people with photosensitivity.

If you're entirely unfamiliar with Fire-Toolz, I've described the music Angel Marcloid puts out with this alias as "risky", because she operates it as such a big tent, welcoming to different styles of theatrical, harsh, and colorful music. Each one of these, on an individual level, can be a challenge to the sensibilities of good taste for many listeners, myself included in some cases. So to have this all working together seems like it is inevitable for someone to be put in a position of needing to forgive some ultimately meaningless stylistic transgression before they can fully let the music into their heart. Which seems like a big ask! And it may not come right away, and the music still asks me to adjust in new ways, but the rewards have absolutely been worth the effort.

The first video for the new album was for Shenpa Indicator Light!!!, directed by Faye Fadem. She performs music as Trust Fund Ozu, and will be one of the additional performers for the premiere party. She has a few animations on her YouTube page (and a great Yee meme), but hopefully that page gets full of more animation, because this rules.

I love these kind of narrative character based videos, like Blur's "Coffee & TV", where the focus is on some small creature going through some ups and downs. Having the emotional attachment to whatever they're going through can open me up to amplifying the response to the music, or take me down a path with it that I might not have arrived at so quickly if I only had the music.

The video is quite eventful, but I'd like to just highlight this one small moment in the beginning. The character is on the move and the song's lyrics are appearing on screen. 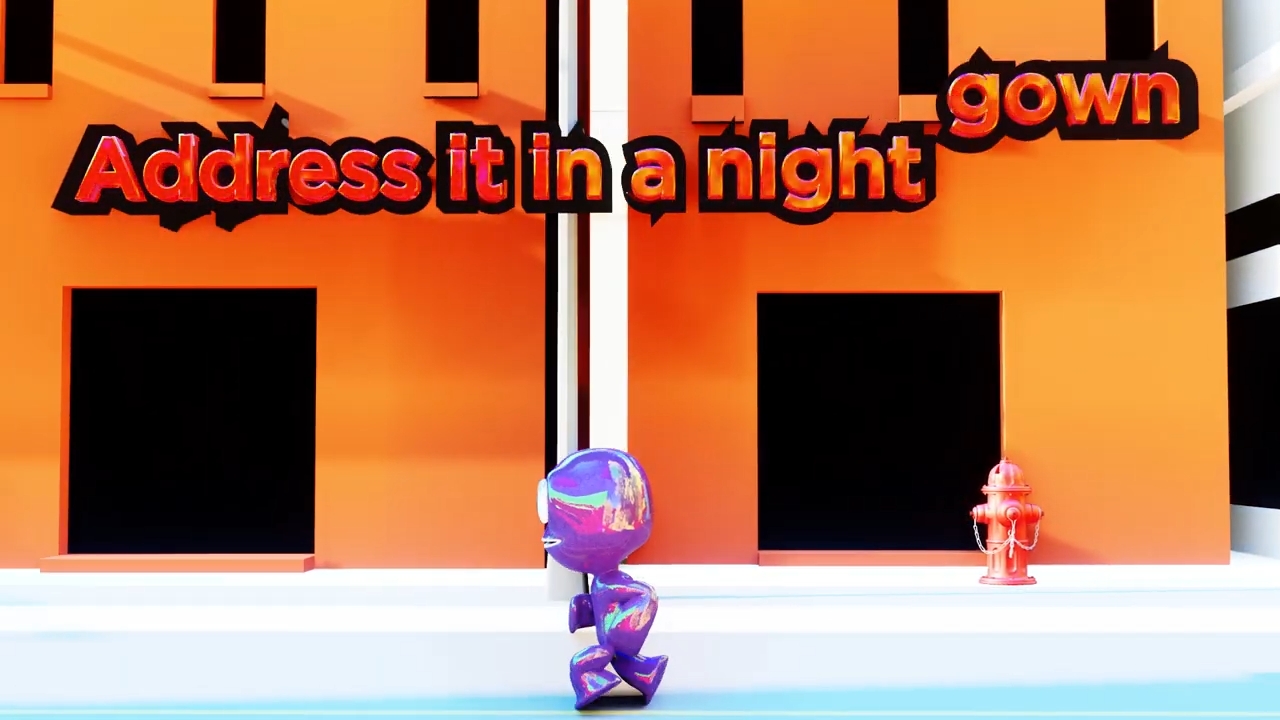 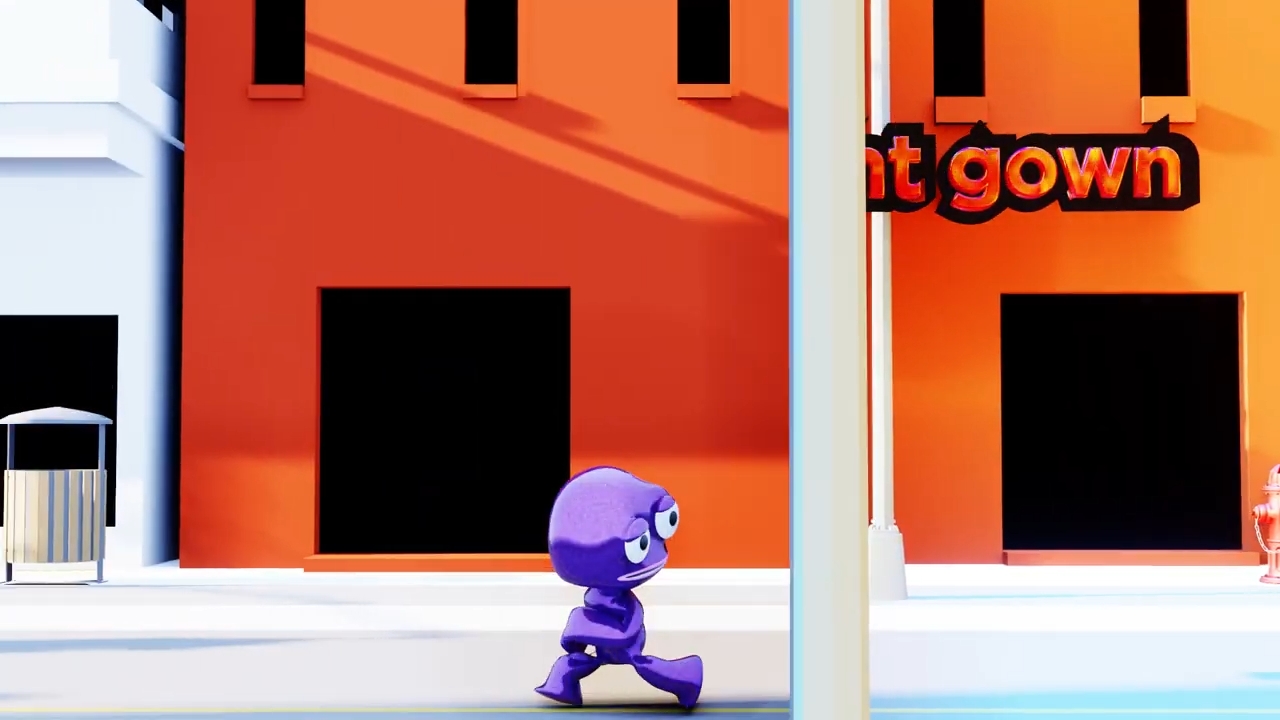 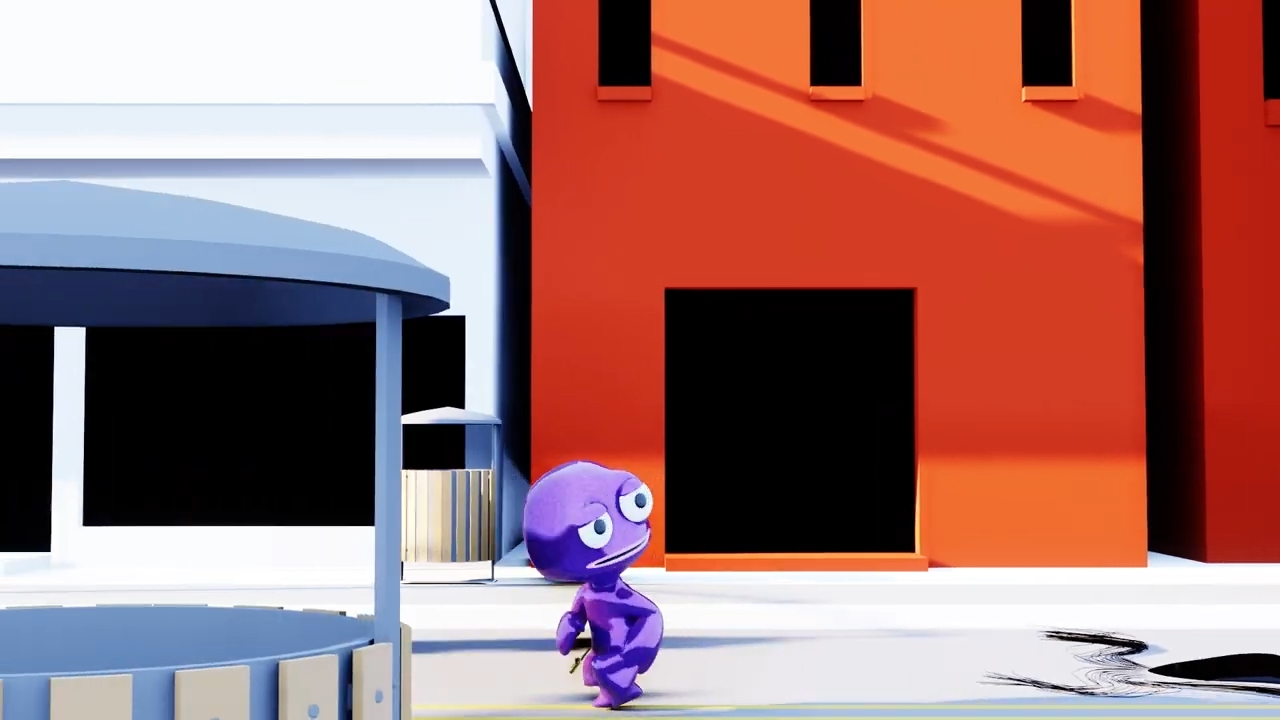 As the character passes by a streetlamp, the words disappear, and this is noticed. The face displays confusion and alarm at this development, and it heightens my own sense of uneasiness that pops up in the music at this very moment from the synth. There's a lot of great synchronicity like this, even as the song and visuals get much more dense in content and meaning. Really fantastic execution on this one.

It's also a great introduction to the album, making it clear that you're going to get something a little different with the vocals on this album as one of the primary vehicles for melody in the song. Previous releases mostly stuck to extreme vocal presentations, so it's very cool to continue to get my expectations and sensibilities challenged, to still not entirely know what I'm in for.

The next video is directed by Ben Levin, who does a lot of strange comedy/educational musical stuff along with some animations, very wild. He provides the visuals for Lellow Birbs. 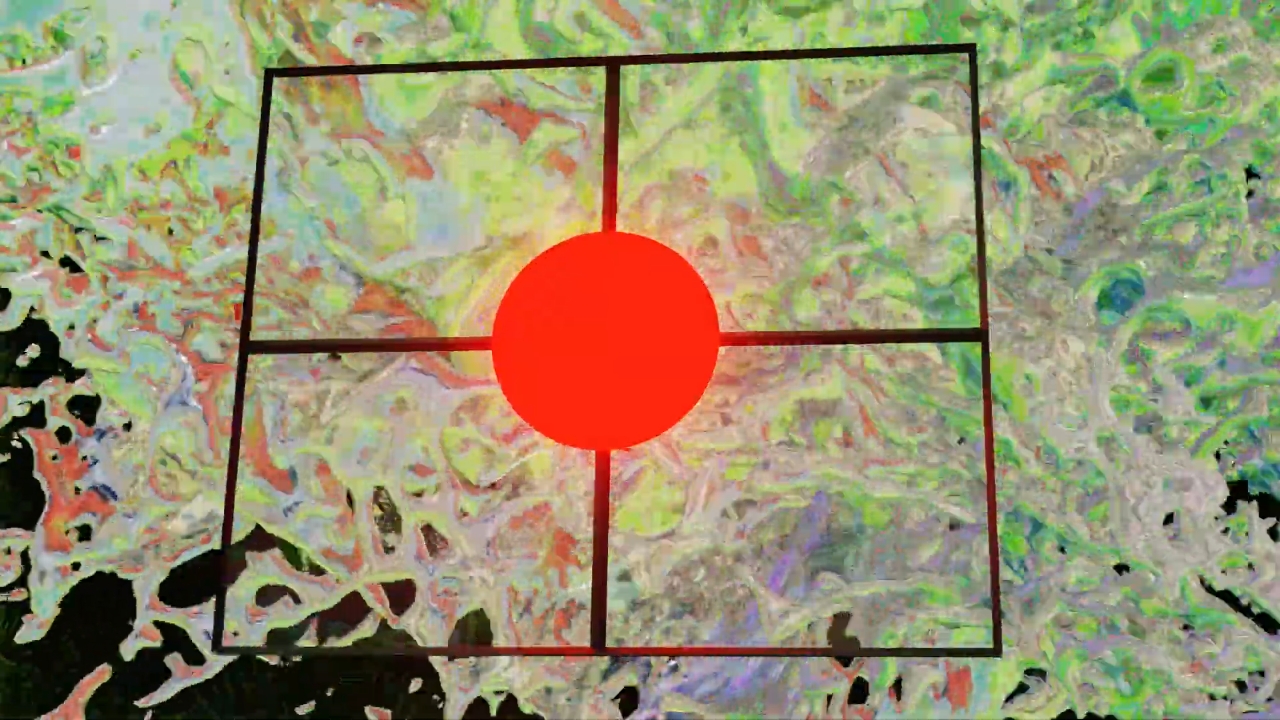 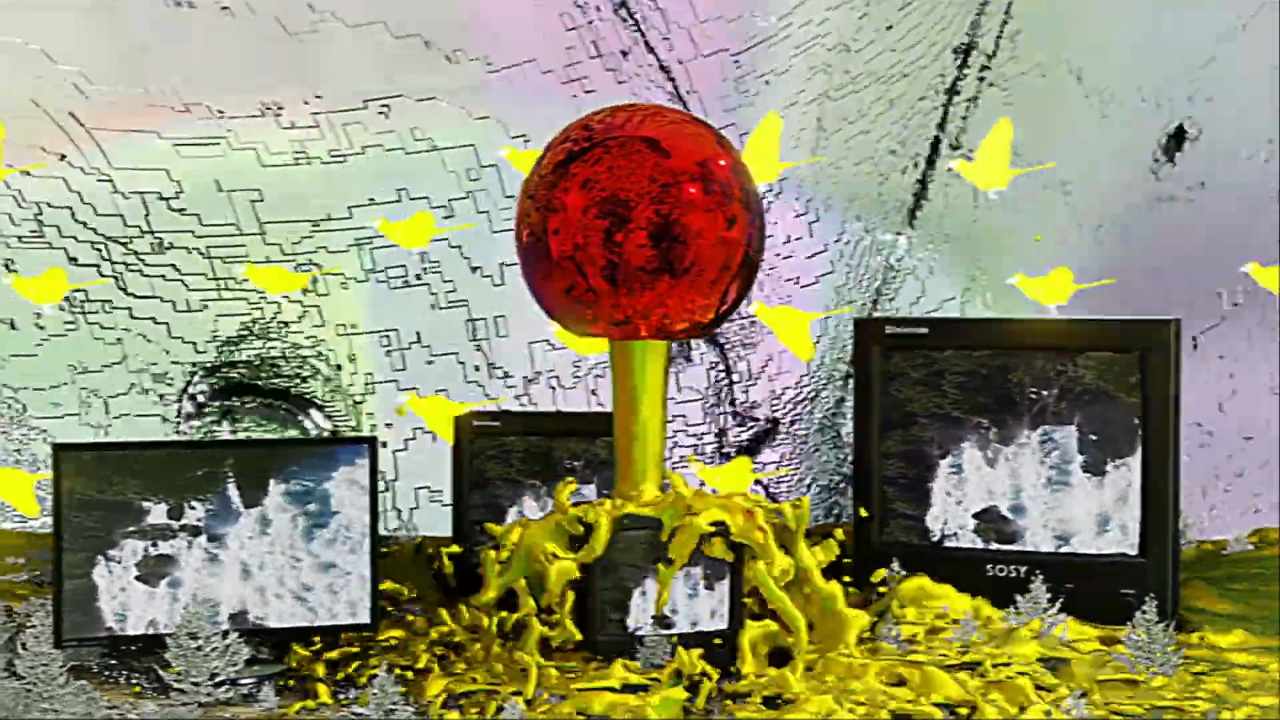 This track gets to the harsh vocals that are more familiar from previous Fire-Toolz releases, with some kind of spatial diffusion distortion that makes them sound particularly earth shattering, especially when paired with some pummelling drums. The visuals are appropriately abstract and visceral, like there's a lot of stuff with this fluid in the screenshots above, there's something about the way it pours out of this red orb, it feels like I'm seeing something that is physically extreme, but like it's a few degrees removed from the real thing, enough to nudge the parts of the mind that would be getting set on fire by the unfiltered version. There's even a bit where we see some Hamburger Helper type of character decay. Sprouting moss, falling apart, and spilling goo, it's kind of extreme, but I think the abstractions operate as a similar sort of diffusion as what's on the vocals, like the horror of what's happening to this hand person is not as extreme as it could have been with some slight changes in how it was represented.

The third video is for I Am A Cloud, directed by Jesse Bond. I haven't done as much digging into Bond's other work, but there's a new video that just got uploaded the other day called "BMX BARNACLE", very cool stuff. 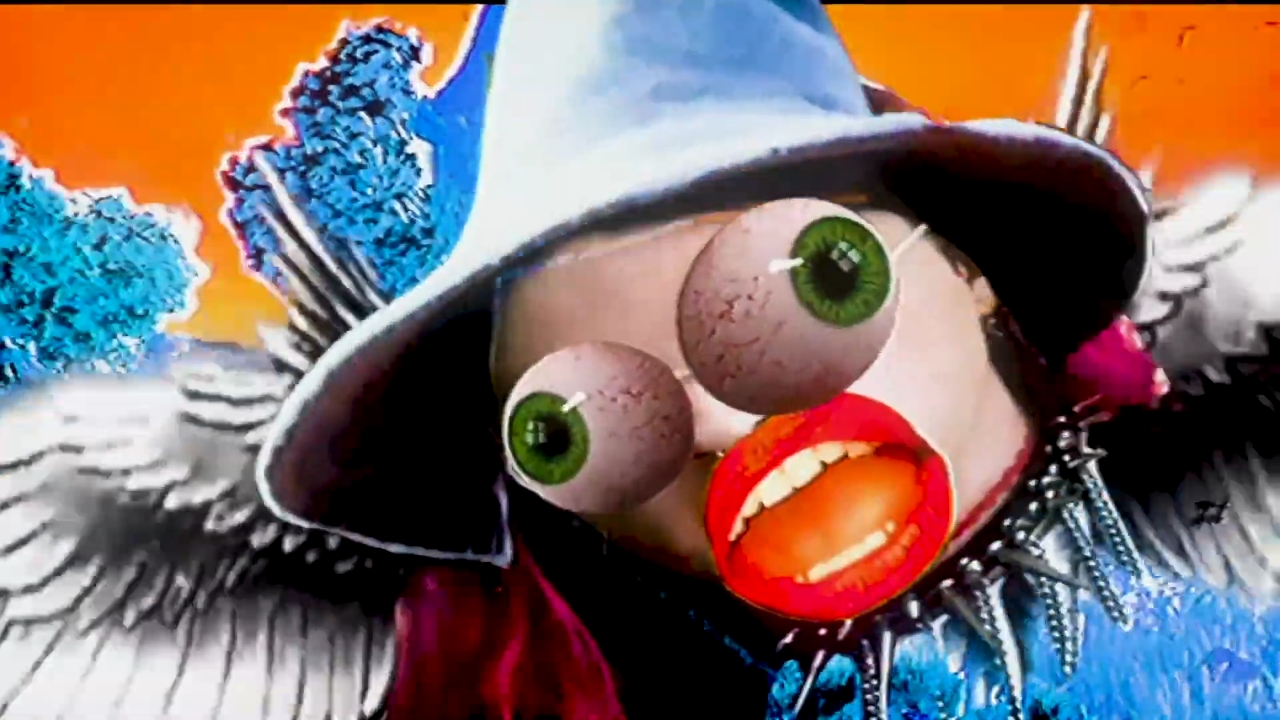 This one looks a bit different the previous two videos, like this picture looks like it's out of those freaky Quiznos commercials. No more glossy 3D, this one gets messy with some video collage. There's a lot of stuff with eyes. 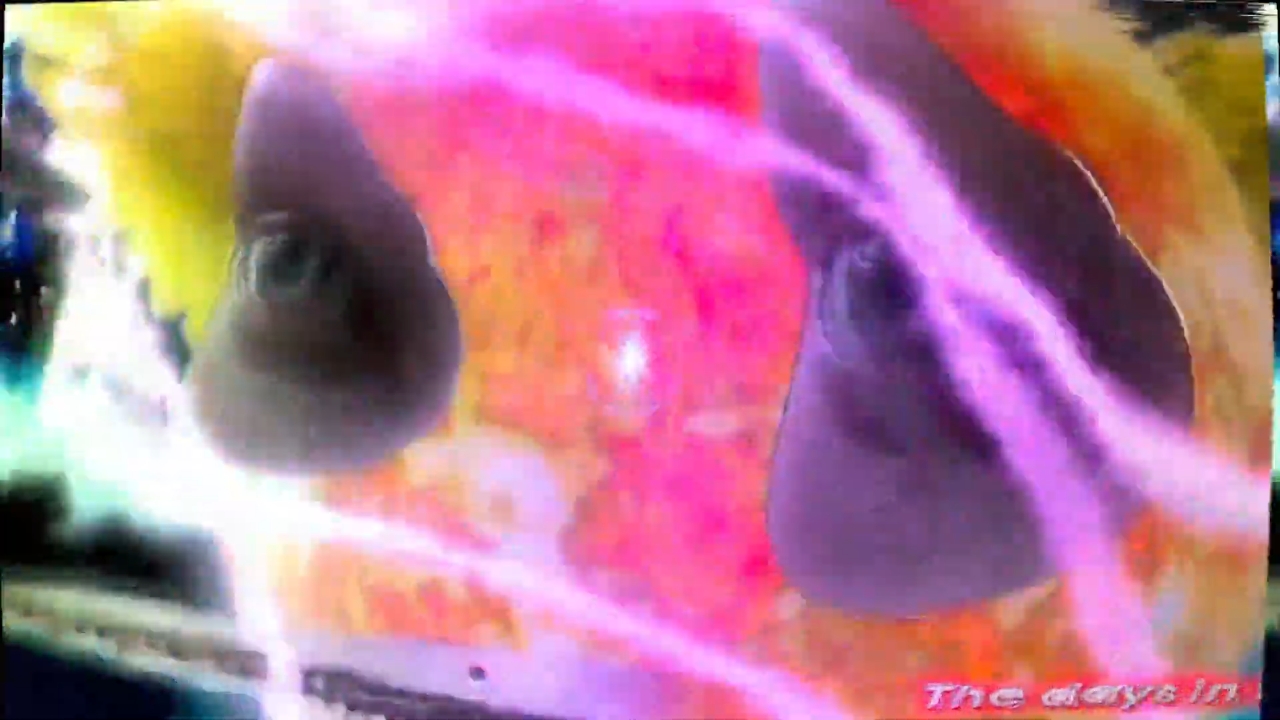 There's a lot of keyframed motion and psuedo-3D perspective warping, done in a way that takes a sledgehammer to any perception of a coherent physical space, and there's so many loud colors. I found it a bit strange at first, because the song feels like more on the relaxed side, like there's a bit of a clash between visuals and song. But that works for the song, since there is a strong contrast between the harsher vocals and the rest of the music. I may have gotten a bit numb to the shock of that, and this video probably helped reactivate that, which I take as a positive.

This one may have some kind of narrative aspect to it, Marcloid appears frequently in various magic-using guises, like this point where she's some kind of miniature winged being stirring a cauldron.

I dig it, but I'll probably need to get a bit more focused if I want to pull anything like a plot out of it. But I think it still works great as a purely sensory experience.

The fourth video is from Nick Krueger, for the opening two songs from the album, ≈ In The Pinewaves ≈ / guardian angel bear. This one operates in a similar space to what Levin produced, though it's much less of extreme in how it treats the eyes. There's still some vivid saturation in the colors. 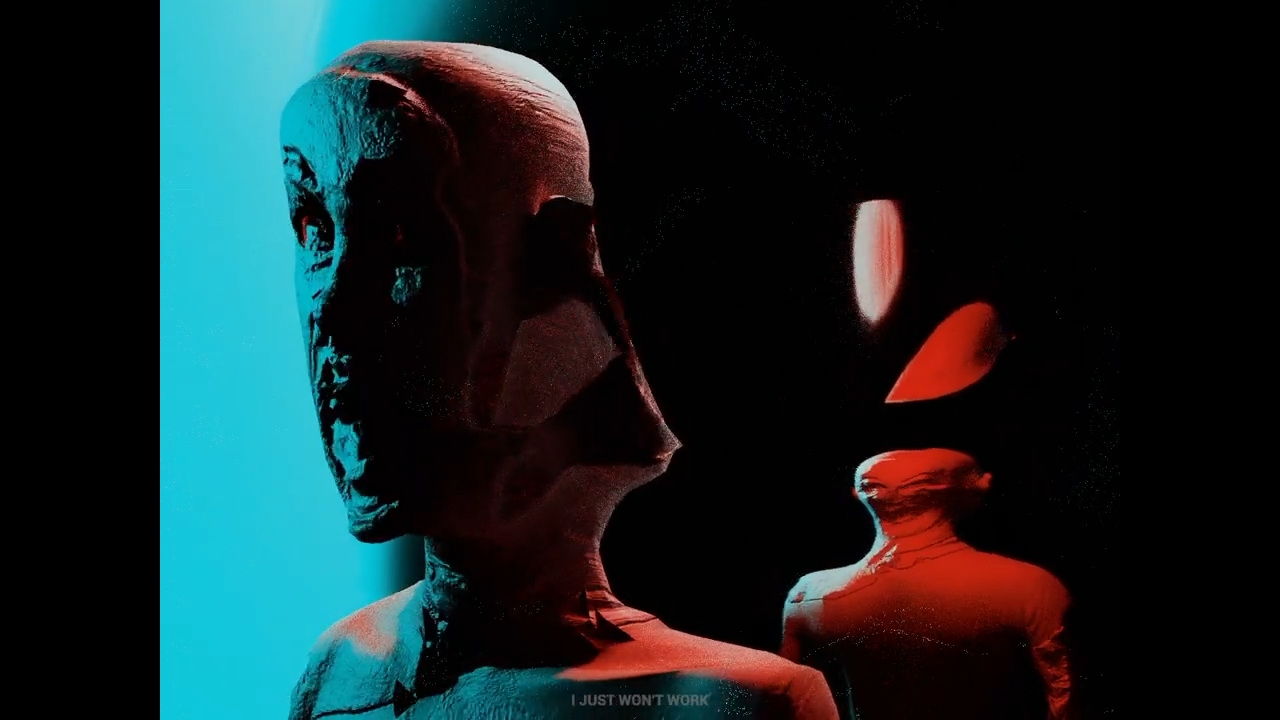 But overall I would say the palette is a bit more neutral/natural. 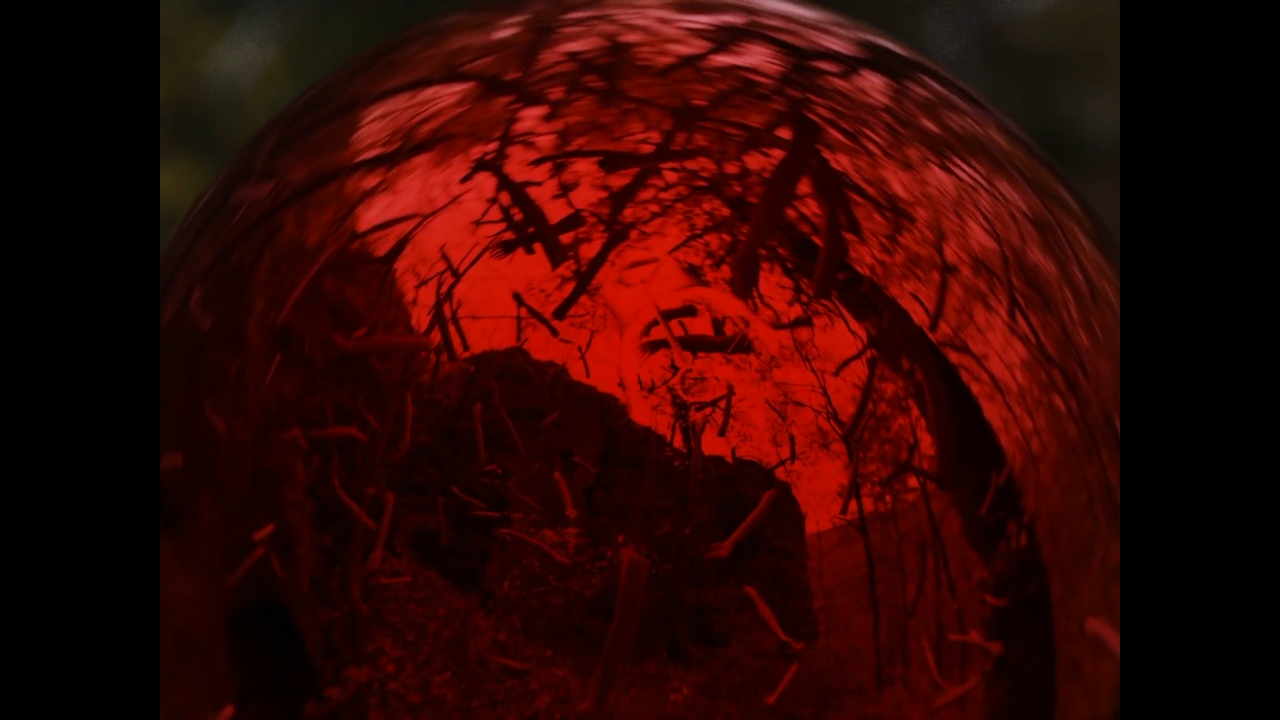 I think this is an excellent choice, and it really pays off with the quieter moments in these tracks. The end of In The Pinewaves has everything die down and lets through some environmental-type of sounds, and then guardian angel bear has a bit of a false start before it really gets going. And when that happens, it's like the camera goes inside of a diamond and we see all of these reflections of Marcloid, hair bright red, it's an excellent payoff to the restraint that was shown up to this point.

The last video is directed by Marcloid herself, for Thick_flowy_glowy_sparkly_stingy_pain.mpeg. 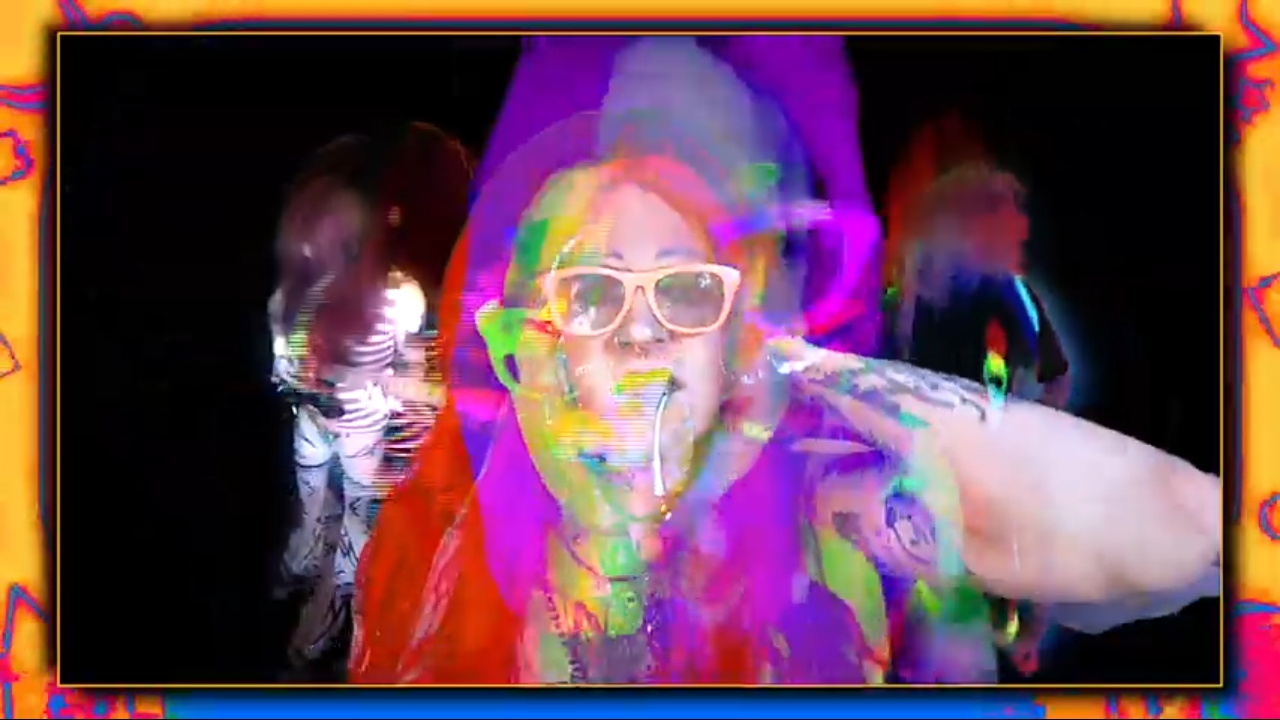 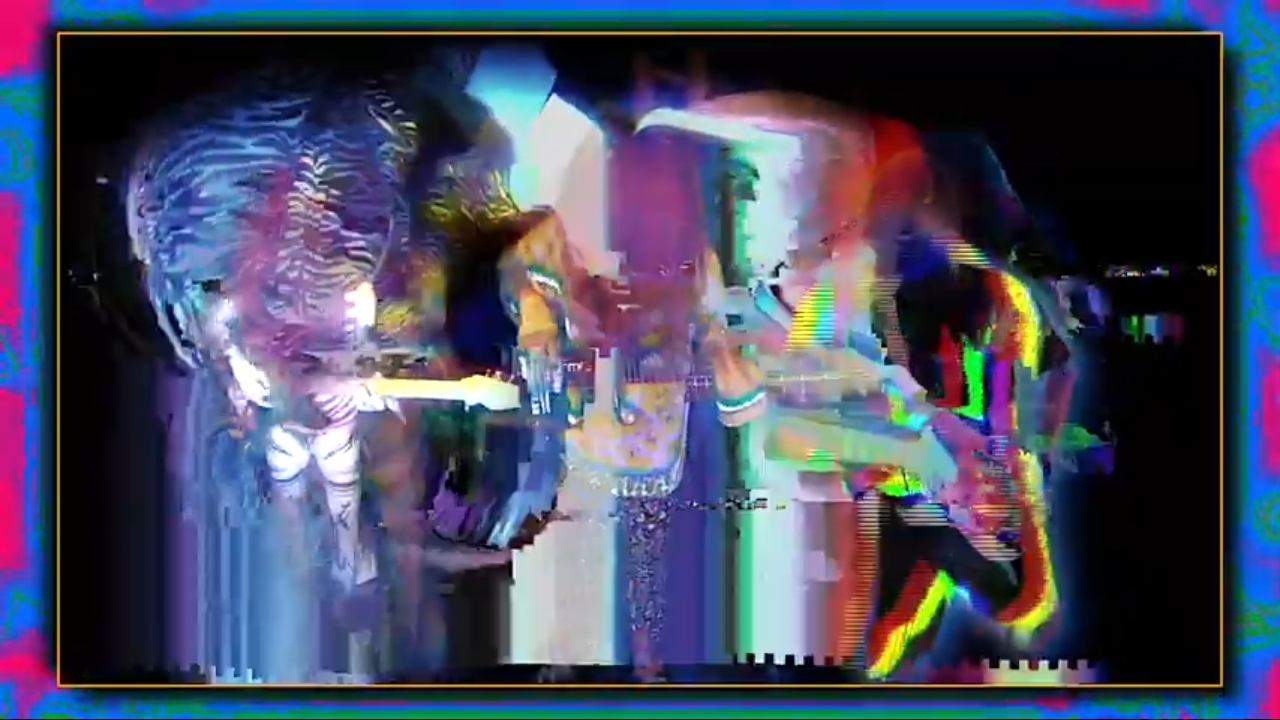 This one is kind of operating on a smaller scale than the others, it's a "straightforward" performance video. Except the impression of a band is created through duplicating Marcloids image, and the layering and color saturation gets so extreme, like in the 2nd screenshot there, it's like the layering isn't purely additive, the way they blend is ripping a hole into the image rather than just purely stacking. It's another great addition to a strong collection of videos!

So yeah, give these a watch, and be sure to check out this stream later today!